Book Review: Tales from the Bottom of My Sole by David Kingston Yeh

Book Review: Tales from the Bottom of My Sole by David Kingston Yeh

This sequel to David Kingston Yeh’s A Boy at the Edge of the World is just as gloriously delightful and brimming with the essence of life as the first in this series. Though Tales From the Bottom of My Sole (Goodreads, Kindle, Book Depository) can totally be read as a standalone, I adored the magic of meeting up with the crew from the first book and hearing the characters discuss their memories of things that happened in that first book.

I remain in awe of David Kingston Yeh‘s writing. The world-building, the storytelling and depth of each and every character he writes is vivid and rich as we are taken on this journey of nights out and relaxed afternoons. In Tales From the Bottom of My Sole, we are quietly handed jewels of the family histories and legacies behind characters we’d never know so intimately in any other novel. Beyond the characters, the author has their conversations place so many real-life stories of feminism, revolution, liberation, queer theory and queer history in here –moments that are quirky, silly, inspiring, empowering, and just-so-damn-interesting are contained within the narrative. Tales is a story that unwraps itself so many times over the more you think about each scene.

We spend a lot of time around David’s family: when his brother lives with Daniel in their apartment for a while, in Italy where there’s an extended family reunion taking place, in discoveries of the unspoken secrets between them all. We even have chapters told from David’s mother’s perspective. The unfolding of David’s brother coming back into his life, and the level of authenticity that’s felt from every side is astonishing, and comforting. There is one accidental instance of deadnaming, and it’s not in his presence, but outside of that I felt the story to be told with sensitivity and unflinching patience and openness. The struggles we see of David coming to terms with meeting Luke are not related to his gender, but around the power dynamics of when secrets are shared and how much information is held back. Each character (again, even the seemingly-small-parts) plays a pivotal role in embracing Luke in this casual but intentional way. I really enjoyed and appreciated it.

The story invites us into the intricacies and antagonism that can tangle between siblings when they’ve gone through so much change apart from each other. –and we witness the same struggles in the way Daniel is continuously confronted with his exes and the echoes of those endings.

As always, and I know it is the intention of the author, Tales is filled with queer joy and queer sex and conversations about all of it spoken freely. I loved reading Daniel’s ever-present, almost incidental sexual thoughts and fantasies even in the most random moments!

I’ve discovered that I’ve outgrown love stories where the characters walk in and out of each other’s lives at will, regardless of whether it’s in response to betrayal or hurt or misunderstandings. The love between David and Daniel, the ups and downs and time apart and together in Tales felt so tangible throughout. I didn’t want it to slip through my hands, and I also didn’t think it ever would, but as life continued and bloomed around them and between them, I held onto it hard in case. Which kind of reminds me of how David and Daniel seem to see each other in this book. It is truly something special to know that their relationship is as sacred to the author as it is my wish to be. It makes the ride feel so much easier, allowing me to enjoy every detail we are handed about this messy, magnificent world of Daniel Garneau.

Once again, Daniel’s story made me long to visit Toronto. I waited until I finished the book (which I read in two sittings over two days, and only stopped reading the one time because there’s a casual Xavier Dolan cameo and I simply could not deal with the amount of fireworks I felt inside at suddenly meeting him inside Daniel’s world) [Alexa, play Selena Gomez & Demi Lovato’s timeless Disney hit ‘Two Worlds Collide’] before I delved into Googling everything I’d highlighted: Is this café a real place? (Yes! Though, sadly, some of them are closed down by now) How did I not know about the Bible’s David and Jonathan? (A story as overwhelmingly beautiful and unforgettable as Patroclus and Achilles, who are also mentioned in the book!) Patriarchy-crushing children’s books, protests in solidarity with sex workers, a circus-themed cake shop! (Real, but not the one in this book; real and epic; real, but closed-down.)

*I seriously think this would make an INCREDIBLE graphic novel. This book should come with an illustrated guide or map of Daniel’s Garneau’s Toronto. I couldn’t help drawing so much of the book as I read it! I would totally buy an illustrated map of places Daniel visits / mentions / made me want to come to Canada for!

As with A Boy at the Edge of the World, at the end of this book I felt like I’d really truly LIVED, but also that I couldn’t wait to go out and find a collective of queer kids and found family and their extended family, to embrace and engage with the eccentricities out there in the world, in my city and in Daniel’s! Being so full with that feeling as the wave of reality hit: That we are living in a pandemic. That there are no crowded bars, no restaurants spilling over into sidewalks, no cafes to go for tea, no spontaneously meeting a kindred spirit, not even an obnoxious one who somehow intrigues you while you’re waiting line for the fitting room –was such a strange, heavy heartache. I went from a moment of being so overcome by emotion with longing for a life as full and radiant and ever-changing as Daniel and David’s, to a longer moment in the quiet calm of not knowing what to do with this feeling.

So I read it again immediately after finishing it, and you will want to do the same. I could not recommend this book enough. It’s precious and powerful and I could not put it down.

Content warnings: Luke is deadnamed two or three times at the very beginning of his time with them, not in his presence and it’s entirely accidental as they’ve just been introduced, but still. A miscarriage.

There’s going to be an audiobook! You can read David’s post about selecting the perfect narrator here. And! There’s going to be a third book! See David’s Instagram post about it here. Also! A moment of truly heartfelt BLOOMING for the fact that he wrote this post (beautiful, amazing) and then ended it with “I wrote this because I can’t stop thinking about [something that I, ANDREA, WROTE IN MY REVIEW!!]” and then quoted me in his blog!

Also: David’s Instagram presence is everything I could wish for! He shares all these colourful, gorgeous, personality-filled pictures of his books, with lovely captions and a general feeling of contentment and enthusiasm and pride. It makes me very happy. 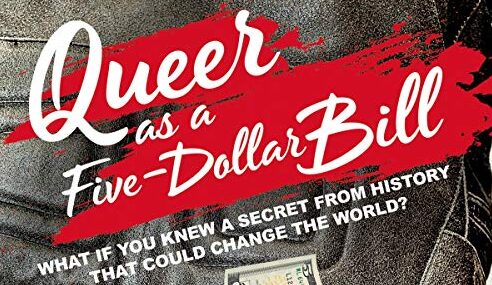